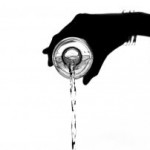 I almost never buy bottled water to drink. Instead I prefer to drink filtered water from the tap. But on a recent trip to New York City I have to confess that I coughed up a ridiculous $3 a bottle for “Fiji Natural Artesian Water.” I don’t know if it was the indulgence of being on vacation, or the less-deliciously presented bathroom sink of my hotel room, but I fell into the trap of paying for water three nights in a row. Fiji Water, according to their website, is “Far from pollution. Far from acid rain. Far from industrial waste.  There’s no question about it: Fiji is far away. But when it comes to drinking water, ‘remote’ happens to be very, very good.”

Is it? Who knows.

The Fiji website has a lot of good stories about their water production, but I can’t find anything even approaching an unspun scientific accounting of chemical contaminants.

According to two studies presented today to members of Congress, the tap sounds better and better.

One of the reports, published by the Environmental Group, a non-profit, found the following:

Unlike tap water, where consumers are provided with test results every year, the bottled water industry is not required to disclose the results of any contaminant testing that it conducts. Instead, the industry hides behind the claim that bottled water is held to the same safety standards as tap water. But with promotional campaigns saturated with images of mountain springs, and prices 1,900 times the price of tap water, consumers are clearly led to believe that they are buying a product that has been purified to a level beyond the water that comes out of the garden hose.

Among those chemicals isolated from various bottled waters were trihalomethanes, bromodichloromethane, chlorine disinfection byproducts, and urban wastewater pollutants (caffeine, pharmaceuticals, heavy metals, arsenic, fertilizer residue, solvents, plasticizers, propellants).  Mmm.  Sounds like a Twinkie.  Often the water tested was indistinguishable from, or inferior to, regular unfiltered municipal water. The study didn’t even get specifically into phthalates – esters added to plastic bottles to increase their flexibility, which have been linked to some ill health effects, and are increasingly banned in other products such as children’s toys in the U.S. and E.U.

But then there’s this:

The study also included assays for breast cancer cell proliferation, conducted at the University of Missouri. One bottled water brand spurred a 78% increase in the growth of the breast cancer cells compared to the control sample, with 1,200 initial breast cancer cells multiplying to 32,000 in 4 days, versus only 18,000 for the control sample, indicating that chemical contaminants in the bottled water sample stimulated accelerated division of cancer cells. When estrogen-blocking chemicals were added, the effect was inhibited, showing that the cancer-spurring chemicals mimic estrogen, a hormone linked to breast cancer. Though this result is considered a modest effect relative to the potency of some other industrial chemicals in spurring breast cancer cell growth, the sheer volume of bottled water people consume elevates the health significance of the finding. While the specific chemical(s) responsible for this cancer cell proliferation were not identified in this pilot study, ingestion of endocrine-disrupting and cancer-promoting chemicals from plastics is considered to be a potentially important health concern (Le 2008).

With the bottled water industry raking in around $12-16 billion dollars a year, and Americans consuming double the amount of bottled water they did ten years ago, this study is significant.

The environmental effects of this bottled water craze are also inexcusable. I cringe in line at the grocery store as I watch the cases of bottled water and soda being hoisted onto the conveyor belt for purchase. 36 billion bottles of water were sold in 2006 alone, with only 1/5th of these being recycled. Water bottle production consumes 1.5 million barrels of oil per year. Why do we need bottled water again?

Currently there is a double standard where tap water suppliers provide information to consumers on contaminants, filtration techniques, and source water; bottled water companies do not. This double standard must be eliminated immediately; Bottled water should conform to the same right-to-know standards as tap water.

The Government Accountability Office (GAO) report echoes this recommendation in a concise 1 page highlight sheet.  In fairness it seems that some companies do provide some of this information, even if it is cherry picked and more limited than that available for tap water. Dasani, which has publicly revealed the source of its water to be filtered municipal water, listed this analysis at least.

Maybe the bottled water you buy is amazingly pure (Poland Springs talks about a polio victim who lived 52 years more after drinking water from its spring). But paying for that possibility, with unknown chemical risks, and certain environmental impact, seems ill-advised. Tap water may not be all that great either, but at least it is better regulated, with better reporting systems for problems, and so much cheaper.

For economic and environmental reasons, if nothing else, I’ll keep away from the bottle, so to speak.

11 thoughts on “Bottled Water Under Scrutiny”