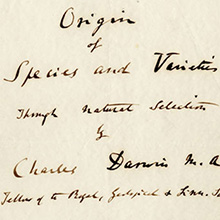 Last month I visited an exhibit entitled Dialogues with Darwin held at the American Philosophical Society Museum. On display are original handwritten letters by Darwin to other eminent scientists, manuscripts such as his handwritten title page for On the Origin of Species, rare first editions of his work, and handsomely illustrated books by other scientists.

The exhibition traces the history of his theory of evolution, and contrasts it with competing ideas of the time, some of which now seem quite bizarre.  For those not wanting to trek all the way to Philly (I was at a conference already), there is an amazingly good online museum tour in which you can get the same virtual experience as seeing the originals.

A few reflections from my visit: 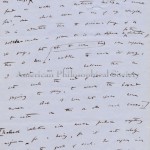 As a physician I consider Darwin’s contributions to science particularly relevant. His theory of evolution sparked new advances in the fields of genetics, embryology, and epidemiology. Natural selection as a process drives the age-old battle between mankind and disease. It keeps us forever entangled in a race against drug-resistant microorganisms and new viral scourges. Learning about the evolutionary origins of certain diseases may provide hints about how to better treat them. Understanding the basic processes of evolution has helped us better comprehend many genetic diseases that are inherited from one generation to the next.

Critics of evolution often point to sinister eugenics thinking (exemplified by Nazi Germany) as evidence of the theory’s evils. But Darwin consistently fought against the notion that his theory justified racial inequalities as the natural ends of selection. For example, he strongly disagreed with Josia Nott, who in 1854 published this racially prejudiced catalogue of different human species: 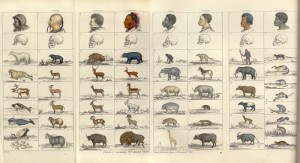 Not only are these drawings obvious caricatures, but the suture lines in the skulls were drawn with false variations between “species” of men. Real skulls in different peoples of the world are quite similar, and the list of misconceptions only starts there…

The question that generates the most controversy to this day is what does evolution imply about religion, and specifically about a “Creator?” The Museum notes that Darwin does not address the origin of life in his first edition of On the Origin of Species. Perhaps his reluctance to set off a firestorm of religious condemnation (and other reasons) played a part in delaying the publication of his ideas (first conceived in 1837) until 1859. In the 2nd British edition he inserted “Creator” into the book’s last paragraph. Letters show he later regretted it as a response to public pressure, and that he meant the term to refer to “the unknown.” Darwin was a self-proclaimed agnostic publicly.

I had the privilege of visiting Charles Darwin’s grave one week to the day after his 200th birthday. I was traveling in London and visited Westminster Abbey, where despite his apparent wishes to the contrary, he was buried in the hallowed religious landmark among England’s greatest figures. It is apparent to this day that religious leaders are conflicted about him, as his tombstone is rather unceremoniously marked. If you weren’t specifically looking it would be easy to miss. It is comically juxtaposed with the extravagant tomb of the more pious Isaac Newton. Even the Westminster Abbey official tourist pamphlet observing Darwin’s 200th birthday spent most of its words lamenting his “unfortunate” loss of religion instead of discussing his contributions to science. 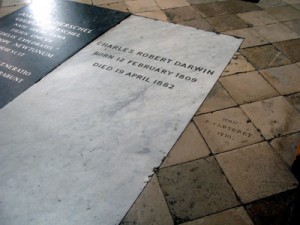 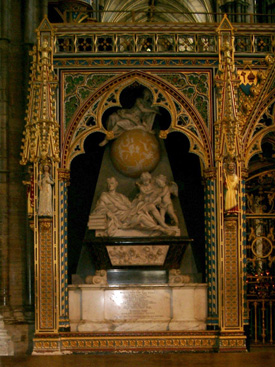 I came away from the exhibit with a great respect for Darwin as a synthesizer of ideas. Among the disparate influences in his life that led to his unifying theory, one can count his grandfather’s poetry, his early training in geology and his correspondence with geologist Charles Lyell, his legendary voyages aboard the H.M.S. Beagle collecting and comparing biological specimens, his reading of Thomas Malthus and economic theory, and even his study of theology. Theologist William Paley argued that the sheer complexity of nature required a “Maker,” with which Darwin agreed, but replaced a maker with a process – natural selection. Many clergy of the time reconciled this truth with their religion by considering “natural selection” a tool wielded by God, while others greatly condemned Darwin.

Thomas Huxley’s iconic drawing of 1863 (four year after On the Origin of Species was published) served as a more compelling visual argument of man’s place in nature being not that different from other animals. The drawing incorrectly implies a direct lineage or progressive march, but did open the doors to a question that Darwin had avoided (and spawned a lot of creative t-shirt designs). He published The Descent of Man in 1871. 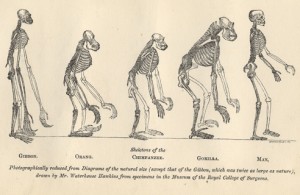 It is interesting that the word “evolution” is never used in On the Origin of Species. The word “evolved” is only used once. It is the last word of the book:

There is grandeur in this view of life, with its several powers, having been originally breathed by the Creator into a few forms or into one; and that, whilst this planet has gone cycling on according to the fixed law of gravity, from so simple a beginning endless forms most beautiful and most wonderful have been and are being, evolved.

The museum, in keeping with its dialogues theme, reserved two bulletin boards for sticky notes upon which visitors could write their reactions to the exhibit. There were the predictable quarrels between those naming the Bible as the only source of knowledge they needed, and those who feel religion is the source of all evil. But there were also more nuanced arguments and opinions, and the museum also has an online forum to continue this dialogue. If you check out the online exhibit, you may want to contribute your thoughts. They also ask whether Darwin would have been a blogger were the medium to exist in his day. I tend to think he would have blogged his voyages as a young man upon The Beagle, but that his more reserved tendencies would have kept him from the acid debate that rages today.

Darwin is remembered for his eloquence as well as his ideas.  His correspondence is gentle, respectful, and intellectually curious, even if his handwriting is atrocious.  He suffered from an array of medical ailments and symptoms during his lifetime, and at one point had consulted over 20 baffled doctors.  In retrospect his ills have been attributed to diseases as diverse as Chagas Disease to Anxiety…  I’ll pick up with the medical aspects in the next post.

6 thoughts on “Dialogues with Darwin Exhibit”