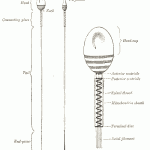 Today NPR ran a story about fierce competition and cooperation among mouse sperm cells trying to fertilize an ovum. Apparently spermatozoa from the same male will often clump together, wiggling their flagella in a collective swim that accelerates the group faster towards an egg. In the race to be the first sperm to fertilize an egg this team approach (with sperm of a feather flocking together) may confer an evolutionary advantage. Solo-swimmers move more leisurely. The research and cool video presented on NPR were of sperm from the promiscuous deer mouse.  Such murine sperm “behavior” may not be as evolutionarily needed in (usually) less promiscuous humans. Yet the idea of sperm cooperation, fitness, and competition in a microscopic steeplechase is fascinating.

Since this blog is oriented towards human health, I’ll keep my comments about mouse sperm to an ignorant minimum.  But the NPR article and several recent questions from patients got me thinking I should brush up on my male reproductive knowledge.  On a macroscopic level, optimizing sperm fitness is often a topic of men’s health magazines, macho boasting, cheesy websites peddling herbs, and urban legends of super sperm. But for those men with infertility, issues of healthy sperm can be no laughing matter. If a precise cause of infertility can be found then a specific treatment can be recommended, but there are also general measures which can positively affect sperm fitness (in no particular order):

Cutting down on alcohol. More than one or two drinks a day has been associated with lower sperm counts and lower quality sperm. Of course alcohol has long been considered an aphrodisiac and social lubricant, and its independent discovery and persistence in most early, successful civilizations would seem to hint at some overall advantage in moderation.

Reducing cell phone usage. Although this is controversial, at least two studies out of the Cleveland Clinic found that the duration of cell phone usage in men correlated inversely with the quality of semen. More hours talking on a cell phone correlated with lower sperm counts, motility, viability, and normal morphology.

Not smoking marijuana. Smoking weed has been shown to adversely affect sperm morphology and function, and can disrupt hormonal balances as evidenced by the development of gynecomastia (male breasts) in some smokers.

Trying in the winter. Sperm counts are higher in cooler, winter months than in hot summer months, likely due to the fact that cooler extracorporeal temperatures favor more efficient sperm production. Does that mean attempts to keep the testicles cool help? According to a review in Up To Date, “prolonged sitting during work or truck driving, welding, baking, tight fitting underwear and laptop use with increased heat to the testes have been proposed to adversely affect male fertility. The data to support these associations are inconsistent and may be a very weak risk factor for infertility.”

Consider less biking. Sitting on a bicycle seat for more than 30 minutes can increase scrotal temperatures and damage delicate nerves and blood vessels involved in arousal and ejaculation.

Getting a flu shot? Illnesses that result in a fever can damage sperm temporarily. The flu shot helps prevent one such fever-inducing illness.  This has not been studied directly that I know of.

Regular exercise (not excessive), lots of fruits and vegetables, low stress levels, and staying at a healthy weight. These measures are common sense, and are validated by observation.  To challenge any of these dogmatic recommendations for healthy living in general is to incur the wrath of just about everyone, although a recent study found that overweight older women live somewhat longer…

Not doing anabolic steroids. These increase muscle mass and shrink the testicles, significantly reducing fertility by disrupting the pituitary-hypothalamic-gonad axis.

Avoiding toxins such as heavy metals used in industrial workplaces, pesticides and chemicals in solvents. This one is hard to do, especially if you live in an industrial or post-industrial area. Perhaps eating organic foods, and buying your produce fresh at markets from farmers with a commitment to organic farming helps. If it doesn’t actually increase sperm fitness, at least cooking and eating ala Michael Pollan is more satisfying.

Reviewing medicines. Prescribed and over-the-counter medicines can affect fertility. A partial list can be found in the Merck Manual.

Skepticism for herbal remedies. There may be a slight benefit from acetyl-l-carnitine and l-carnitine, and vitamin E, but the evidence is certainly not compelling.  In fact, Up to Date lists the following commonly prescribed therapies as unproven or ineffective: Alpha adrenergic agonists, Kallikrein, Pentoxifylline, Vitamin E, antibiotics, corticosteroids, captopril, zinc, and cooling of the testes.

Skipping lubricants during sex. Most of these products slow sperm down.

Having more frequent sex.  One study showed that among men with DNA-damaged sperm, sperm quality improved with daily sex. For other men, there is a tradeoff between higher sperm volume ejaculated with less frequent sex, and lower sperm quality as it accumulates in the epididymis and is exposed to free radicals and aging. Perhaps 2-3 days is optimal? Feasible?

Seeing an infertility specialist if having problems conceiving. There are multiple treatments available, some of which can be directed towards a specific cause of infertility if identified.

And one final thought about a preoccupation with fertility and reproduction. There are many ways to live a meaningful life, and having children is just one element. For those who can’t answer the call heard from within to produce offspring – life is a giant world to wander through, and there are many selfless, fulfilling, and happy roads to be found.

The human species is not endangered for lack of fertility, and if wearing boxer shorts doesn’t give sperm their best chance in life then so be it. Yet somewhere under a microscope entire armies of murine sperm cells are doing all they can to succeed, even teaming up together so that one of them achieves a Pyrrhic victory as the rest perish.

Bizarrely egocentric and selfless, poetic and bestial, fearful and heroic… just like having children?

2 thoughts on “Mouse Sperm Cooperatively Swimming Together, and Other Thoughts”