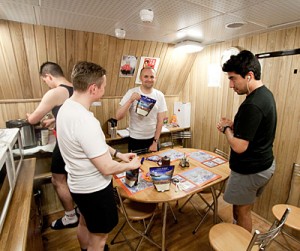 It’s been just over a month since the European Space Agency “launched” the Mars500 project, an earthbound simulation of an interplanetary mission to Mars. Six men climbed into a windowless mock spaceship on June 3rd to spend the better part of 520 days sequestered away from the world, with only books, games, work, shoddy internet, sleep, and each other to pass the time. The unprecedented simulation of a manned mission to Mars includes a 250-day period to get there, a 30-day visit, and a 240-day trip back home.

Critics argue that the experiment amounts to little more than locking up 6 men in a tin can for 17 months with no sun, fresh water, sex, or alcohol, and the hardship of showering only once every 10 days.

The ESA, in cooperation with the Russian Institute of Biomedical Problems, aims to study the severe psychological stresses that such an isolated and confined journey presents. Their diet will be similar to that served on the International Space Station, and the only time in the next 520 days that the hatch will open will be if one of the crew pulls out for some reason. His body would be “pushed out” to space as if he had died.

The frailties of the human body are greatly exposed in such a world. For example,what happens if a crewmember were to suffer appendicitis on an actual journey to Mars? Should prophylactic appendectomies be performed on all astronauts? This issue has been considered, with on-board diagnosis and surgery as the best contingency plan, according to some.

The simulated spaceship consists of three separate modules, each subdivided. The Utility module houses a gym, greenhouse (with meager strawberries), storage, fridge, and lavatory. The Medical module contains working places with medical equipment, a kitchen-dining room, and another lavatory. The Habitable module consists of 6 individual compartments (bedrooms), a living room, a main console, another kitchen, and another bathroom.

Further inspection of the medical module reveals a 3 x 12 meter tube with two “examining rooms,” a toilet, and equipment for medical examinations. Telemedical, laboratory, and diagnostic equipment are included. Should a crewmember become ill, he can be treated or isolated here. The crew includes two doctors, one of whom is a surgeon. In prior experiments bacteria grew quickly in the nooks and crannies of the space capsule simulations, and so the crew will be armed with probiotic supplements and antibiotics if needed. Hopefully a crew of six men will not forget that sanitation (i.e. cleaning up) has been the most important weapon against contagion in the history of mankind.

The Mars500 project will take place under normal Earth gravity conditions, and so the health aspects of such prolonged weightlessness will not be studied. Rather, this mission focuses on the physiological and psychological aspects of an isolated journey (longer than the six-month maximum expeditions currently taken to the International Space Station). Stress, hormone regulation, immunity, sleep quality, mood, and effectiveness of dietary supplements will be studied with the crew routinely collecting a lot of urine, blood, and probably stool.

The volunteers are entirely male, purposefully selected without a woman to avoid the confounding sexual tensions that might arise. In 1999, participants in a comparable experiment were given vodka to celebrate New Year’s Eve: two members then brawled when one tried to kiss a Canadian female astronaut.

Humans have of course been subjected to much worse isolation in our history. Prisoners of war, princesses in towers, the kidnapped children who live 15 years in someone’s basement – all endured much worse psychological punishment.

Yet I do find it fascinating how we flirt with the reality of our isolation in the universe, and the Mars500 experiment is just the most recent academic example. Consider the marathon runner who embarks upon a solitary trial of endurance, or the brave few who’ve rowed across the Atlantic Ocean, or the researcher who studies and dies alone on the North Pole. Such courage and self-control in the face of oblivion is the stuff of Melville, Marquez, and Camus.

I’ll be following this project with curiosity and admiration.

8 thoughts on “Mars500 Mission – An Exercise in Isolation”