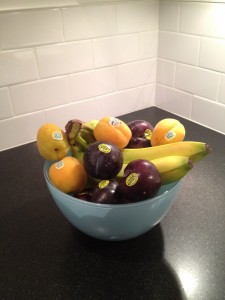 I’ve been feeling a bit more skeptical of the supposed benefits of “organic” foods lately. It’s hard to imagine any greater purity as I watch this fruit in a bowl on my kitchen counter top – a sad modern still life, festooned with brand name stickers. The high grocery bills I’ve been racking up combined with a few recent studies casting doubt over the differences between conventionally grown versus organically grown foods have given me pause.

A large systematic review concluded that organic foods in general are no more nutritious than conventionally produced foods, but did find less antibiotic resistant organisms and pesticide residues on organic foods. More studies are needed to determine if this has any clinical significance for our health.

This echoed a previous analysis published in 2009 which concluded that the nutritional advantage of organically produced food is doubtful when compared to conventional.

The American Academy of Pediatrics recently published guidance on the advantages and disadvantages of organic foods.

EWG has also compiled a list of other vegetables that are low in pesticides anyway, and might not be worth buying organic (simply in terms of personal pesticide exposure). One should also consider the harms to the environment that are inherent in mass conventional produce production.

But I guess the bottom line is that a bowl full of “organic” fruits labeled, tracked, and defined by logo stickers is less than inspiring. The great still lifes hanging in the museums of the world recount a much more sensuous experience of food – exchanged hand to hand at markets, grown from the sweat and care of human toil, and I would imagine savored like rare treasures from the earth, instead of the consumed inputs of someone’s minimum 5 fruits a day. 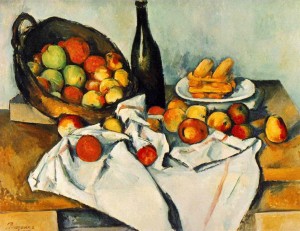 4 thoughts on “Organic Foods – Are They More Nutritious, Safe, or Worthy of Still Life Paintings?”