I’m not sure I can live up to the promise of this post, but as I crouched naked on my hand and knees this weekend, crippled in the 6th hour of profuse diarrhea and vomiting, a few thoughts came to me.

First, how woefully miserable it is to feel sick. Not just sniffly-nose-nasal-congestion-sick, but rather the kind of sick that if it went much longer you might question your will to keep suffering.

I felt a tight, painful clench in my trunk that would not ease; a foul urgency to sit on the toilet as liquid poured out; that familiar burst of saliva and welling nausea as I scrambled to clean one end before the guttural retching ensued on the other; the hot splashing of acid on the palate, and the awkward stare of the spinach from the toilet bowl that just moments ago was floating in my intestines; the exhaustion; the light-headed flop back into the stale bed; the pounding of my heart, craving more fluids with which to pump, but my stomach blockaded by a pervasive and perverse sense of nausea and pain.

As I slowly recovered, there were many thoughts. First, there is no greater pleasure than not being aware of your own bodily existence. Tragically we are unaware of these moments, since they are imperceptible by nature. But to lie still in a bed, or to read a book in a hammock, not beset by the gurgling and bloating of bowel, the burning of stomach acid, the congestion and difficulty of breathing through mucous, the constant nudging pain of a bad back, the pulsing of a migraine… to be free of the alarms of internal machinery is heaven. Perhaps there is a fasting monk on a mountaintop who knows what I mean.

And for as much grandiosity as I’ve already written, I know that my brief “suffering” was small, as is my very existence. Have you seen the photo that the Cassini spacecraft snapped last week of the pale, blue dot that is our Earth? 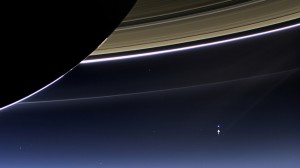 Isn’t it absolutely magnificent? How have the people of the world not stopped everything, laying down their baskets and bayonets and briefcases, to begin the Age of Aquarius?

Because unfortunately, when we are in our life, we are in it. We are billions, programmed to compete, stuck on this little blue dot, howling at each other. Because the struggle is actually much easier than the big picture. How luxurious it is to be grounded in misery, our bowels and bile and wars and petty atrocities tethering us to the moment. Having seen ourselves on this pale blue dot, should we choose to keep being boorishly human, or to seek an enlightened state of relative harmony, peace, and understanding among our similarly diarrhea-plagued brothers and sisters?

As a kid I imagined that once aliens reached our planet, all the different tribes of mankind would unite at last, albeit in self-defense, but finally aware of our common bonds. Yet looking back from Saturn should really be that kind of spark, too. But it fails to trigger our survival instincts, appealing instead to lofty notions of beauty, imagination, and awe. And then we go right back to diarrhea and taxes. Is there comfort in blood, muck, and cruelty? Are we shackled by double helices to be forever self-absorbed and self-serving? And when I wish to see beauty and transcendence in the Cassini spacecraft photo, am I instead glimpsing Life’s unmoored scream into the bitter cold vacuum of radiation and godstuff?

It’s hard to bring this post to any kind of sensible conclusion, but If I were to narrow it down to just two sentences it would be these. If you are currently feeling well, be aware of it, and be humbled by the Universe. And learn more about oral rehydration therapy.

2 thoughts on “Vomiting, Diarrhea, and Our Place in the Universe”