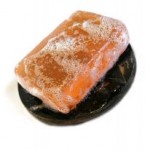 I’ve been buying, using, and recommending Dove Exfoliating Soap as an affordable and low maintenance facial cleanser. Doctor-recommended. In general my skin has liked the stuff. But a friend recently made me aware of the fact that most of these mass-produced exfoliating soaps contain “microbeads” of plastic. These tiny globules of polyethylene act as a gentle abrasive that exfoliates dead skin, but the synthetic grit then washes down our drains and into our watersheds and oceans where it accumulates, gets eaten by sea creatures, and damages our ecosystems. Plastic beads, made from petroleum products, in my soap. Really?

Whether created by the mechanical pounding of waves upon larger pieces of plastic, or formed intentionally as exfoliating microbeads, these little bits of plastic add up. We’ve all seen plastic bottles and junk floating in ponds and rivers, but how much is there that we can’t see? One study found that up to 85% of plastic by weight in some estuaries is microscopic, invisible to the unaided eye, creating a hidden suspension of toxic materials. Many of the synthetic beads are so small that most sewage treatment systems allow them through. From a Slate.com article on the subject:

The thing about plastic exfoliating beads is that they don’t need to break down in order to end up in the stomachs of marine life from otters to octopi. “As this debris occupies the same size range as sand grains and planktonic organisms, it is available to a wide range of invertebrates near the base of the food chain,” says Mark Browne, a scientist at the Centre for Ecological Impacts of Coastal Cities at the University of Sydney who has studied the consequences of microscopic plastic in marine habitats.

… a range of bottom-of-the-food-chain critters—including mussels, barnacles, lugworms, and tiny crustaceans called amphipods—will ingest the particles, which may then remain in their digestive tracts or migrate to other body tissue. New research also suggests that polyethylene is an excellent transporter of phenanthrene, a byproduct of fossil fuel burning that’s a dangerous ocean pollutant.

Is all that plastic (and the many chemicals attached to it, read on) making its way up the food chain, as larger organisms like us devour smaller ones, potentially creating a process not unlike mercury toxicity in our seafood? I’m not qualified to say, except that this sounds plausible.

An environmentally-oriented blog in the Yahoo network has compiled a list of soaps to avoid. You will find, and rub your face with, plentiful polyethylene beads in these brands:

I’m not an expert, but you can probably find suitable alternative soaps without polyethylene at places like Whole Foods and Trader Joe’s.  As a New Year’s resolution I picked up a bar which lists oatmeal as the sole exfoliant. Here are a few good name brands mentioned in the same Yahoo article, with their more natural exfoliating ingredients in parentheses:

*A lot of the blogs mentioned this name brand as a favorite, but I don’t know.

Plastics can take thousands of years to degrade, with some types persisting almost indefinitely. The scope of the problem is immense.  Try to live one day without encountering plastic. It is impossible. We’ve made such a mess of the world that the polyethylene exfoliating beads are just a recent example of our brash disregard. Ever heard of the Great Pacific Garbage Patch?  Discovered in 1997 by Captain Charles Moore, it is the size of Texas:

Captain Moore had wandered into a sump where nearly everything that blows into the water from half the Pacific Rim eventually ends up, spiraling slowly toward a widening horror of industrial excretion. For a week, Moore and his crew found themselves crossing a sea the size of a small continent, covered with floating refuse. It was not unlike an Arctic vessel pushing through chunks of brash ice, except what was bobbing around them was a fright of cups, bottle caps, tangles of fish netting and monofilament line, bits of polystyrene packaging, six-pack rings, spent balloons, filmy scraps of sandwich wrap, and limp plastic bags that defied counting.

Not limited to the Pacific, there are 6 other garbage patches in the oceans of the planet.  All this plastic clogs the digestive tracts of animals that mistake it for food. (Addendum – thanks to a heads up from a reader, you can view some horrific photos of dead albatrosses with stomachs filled by plastic junk, taken by photographer Chris Jordan).  It can also adsorb a lot of other toxic chemicals onto its surface. What health problems is it already causing in humans?  In one report:

…free-floating toxins from all kinds of sources—copy paper, automobile grease, coolant fluids, old fluorescent tubes, and infamous discharges by General Electric and Monsanto plants directly into streams and rivers—readily stick to the surfaces of free-floating plastic.

One study directly correlated ingested plastics with PCBs in the fat tissue of puffins. The astonishing part was the amount. Takada and his colleagues found that the plastic pellets eaten by the birds concentrated poisons to levels as high as 1 million times their normal occurrence in seawater.

We’ve got a lot of work to do, in addition to changing our exfoliating soaps.  Try to avoid buying anything with plastic packaging or that’s made of plastic and you’ll be reminded of how ubiquitous the stuff is. I hope the plastic I recycle actually gets recycled, but I digress.

Review the ingredients in the things you buy, and spend the extra dollar on those products that are made, packaged, and distributed in a responsible way when you can. Without exploding this idea to all that is wrong with our consumption, at least beware of the polyethylene microbeads in exfoliating soaps.

I doubt there will ever be such a discovery as The Great Ground Apricot Kernel Patch and Cornmeal Slick floating in the Pacific Ocean.

19 thoughts on “Exfoliating Soap is Full of Plastic. Seriously.”