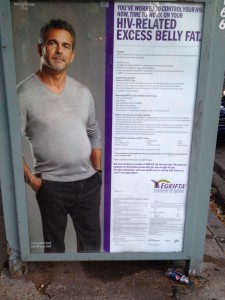 I walked past this advertisement posted at a bus stop the other day and had to pause. It announces a new medication for the treatment of HIV-related belly fat, or lipodystrophy. It is remarkable for many reasons, but perhaps most strikingly it represents the latest sign that the battle against HIV/AIDS has further matured into chronic disease management and a tame discussion in the public realm. It hasn’t always been so of course.

Imagine this advertisement splashing across billboards in the 1980’s when there were no effective treatments for the disease, and the general public feared contracting the disease from any sort of contact with infected individuals. There has been, and continues to be, much suffering from HIV/AIDS. But when one considers the seismic cultural, scientific, and public health shifts that were needed to discover, educate, prevent, and manage this terrifying killer – a sign post proclaiming we can now help the cosmetic effects upon the belly is nothing short of a miracle.

Cynically we can look at this ad and lament the fact that even one penny is being diverted into “weight loss” medications instead of an all out continuing effort to defeat HIV/AIDS in total. One might also notice the irony of the discarded high fructose corn syrup soda bottle on the street beneath the sign. It might also lead to the false assumption that we have already won the battle, and that misery across the world and behind closed doors is only experienced when looking at the belly in the mirror.

But for some reason I felt like this sign was a glimpse of a promising future, and a reminder of a much darker past, in the saga against HIV/AIDS. Weight loss, wasting, and cachexia are now giving way to lipodystrophy and belly fat, according to the signs of the times at least.

These ads from the 1980’s seem rightfully dated: 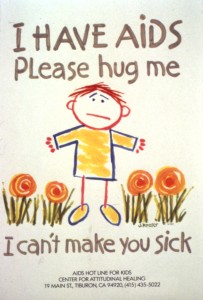 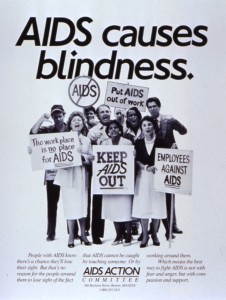