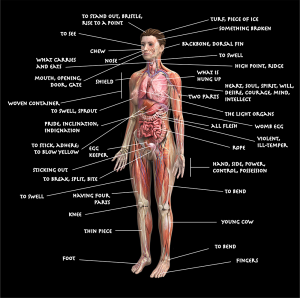 The origin of a word is fascinating, and the etymology of a word’s evolution tells a story.  You can almost picture syllables and letters marching like armies through distant lands – Old England, Low Germany, Ancient Greece… or rising up from a dark, primordial world of shapeless magic to take form and structure.

I’ve changed the anatomic names of the human body on this diagram to tell the story of each organ’s epithet. As a primary source I used Online Etymology Dictionary, which is a labor of love created by Douglas Harper using the best classic sources. The fantastic 3D anatomy rendering is from Zygote Media Group. I found some of the derivations and etymologies quite thought-provoking, while others such as “knee” are simply stated. I had to do a lot of work with my “something broken” to compose this diagram, so please enjoy!

6 thoughts on “Diagram of the Human Body Using Etymologies”