Good news for supporters of trans-fatty acid bans: in New York State counties that implemented restrictions on their use in restaurants and eateries, there were significantly fewer admissions to local hospitals for heart attacks and cardiovascular events.

Specifically, researchers found a 6.2% decline in admission for hearts attacks and strokes combined, and an even greater drop of 7.8% for heart attacks alone. Both reductions were statistically significant.

Evidence has accumulated over the years that consuming trans-fatty acids is associated with increased risk of heart disease, stroke, and diabetes. The FDA plans to restrict the use of trans fats in foods nationwide in 2018, but some localities in New York State went ahead and banned TFA’s in restaurants and eateries starting between 2007-2011.

Processed foods, manufactured for long shelf lives, profit, and the creepy notion of “good mouth-feel,” have long been the biggest culprits using TFA’s. 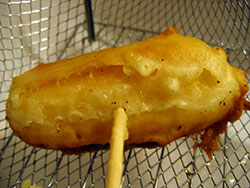 A legacy of the Obama administration will go into effect in 2018, when the complete phase-out of trans fatty acids in American foods is scheduled to be completed.  This happened despite intense lobbying by some companies and associations representing fast food and junk food interests.

The FDA estimated that up to 20,000 heart attacks and 7,000 premature deaths could be prevented each year with this phase-out, not to mention significant reductions in diabetes and cardiovascular disease prevalence.  Perhaps $140,000,000,000 will be saved in healthcare costs over 20 years.

New York City in 2006 under Mayor Bloomberg, and then California in 2008, pioneered the way with this enlightened TFA-banning legislation, but the early 1990’s Congress and then President H.W. Bush deserve some credit, too.

The original Nutrition Labeling and Education Act of 1990, sponsored by Democratic Rep. Henry Waxman, passed both houses of Congress and was signed into law by the first President Bush (H.W).

Ahhh… those nostalgic days of working together for the common good.  From Wikipedia:

The law gives the Food and Drug Administration (FDA) authority to require nutrition labeling of most foods regulated by the Agency; and to require that all nutrient content claims (for example, ‘high fiber’, ‘low fat’, etc.) and health claims meet FDA regulations.[2] The act did not require restaurants to comply with the same standards.

Effective Jan. 1, 2006, the Nutrition Facts Labels on packaged food products are required by the FDA to list how many grams of trans fatty acid (trans fat) are contained within one serving of the product.[1]

So it is even more remarkable that a significant drop in heart attacks was seen with these more recent bans in New York, which really targeted the restaurant and eatery loopholes. Fast food and processed food companies had already decreased their use of TFA’s nationwide by some 85% over the past decades, as mounting evidence of harms and impending class action lawsuits loomed larger, and mandatory labeling of trans-fat content in foods increasingly drove educated consumers away from the products sitting on the shelves and lurking in the fryers.  Nationwide there has been a trend towards lower cardiovascular disease prevalence, but this is multifactorial.

The deep fried Twinkie as we know it will recede into the annals of history, conjured only by roving bands of post-apocalyptic freedom fighters raiding pre-WW3 bomb shelter pantries to find the archaic ingredients.

Humans will no longer be seduced by the Frankenstein mouth-feel of partially hydrogenated oils, which honestly, always tasted malicious somehow anyway.