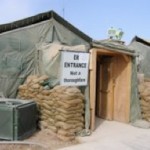 War can paradoxically bring out the best in people. Despite the violence, tragedy, and pain, there are moments of kindness, compassion, and brave camaraderie. Soldiers band together as brothers and sisters under terrible circumstances to offer their lives in support of a nation they deem just and vulnerable. Often they are terribly wounded. Families on both sides of the conflict suffer and grieve sickening losses. The reasons for war seldom justify the human misery it causes, but perhaps one type of soldier has the luxury of always being on the right side. Consider the medic, nurse, or military doctor.

I’m reading an advanced readers copy of Coppola: A Pediatric Surgeon in Iraq. The book is written by Lt. Col. Dr. Chris Coppola, and gives an account of his two tours of duty in Iraq as a pediatric surgeon called upon to act as a trauma surgeon and physician for the war-wounded.

Dr. Coppola writes a compelling narrative about his experiences in Iraq away from his wife, children, and home in Texas. He takes the reader into Iraq as he first encountered the country through a head rattling, stomach nauseating descent via a C130 cargo plane combat landing. On the ground at Balad Air Base, we are given a tour of the bleak world and meager accommodations our military operate in. Sequestered behind walls, checkpoints, and sand bags, an entire makeshift hospital of sorts takes shape. The food is austere and makes going on a diet sound logical.

The patients come quickly: mangled soldiers, victims of IED explosions, children and civilians of both sides. Dr. Coppola goes to work with an expert team of medics and nurses, doing his best to stabilize victims who are brought in bleeding to death, burned and battered. His first priority is to help American combat troops injured in the field. Some live and some unfortunately die. Remarkably our military’s medical “modus operandum” is to help those who are ill, regardless of whether or not the patient was an enemy or a friend.

There is much internal conflict for Dr. Coppola. He grapples with the heartache of being away from his family. He mourns the young soldiers whom he cannot save, his arms often covered in their blood. He draws strength from the medical team members all working together in a noble endeavor, and feels pride in the brave men and women of the military who’ve been called upon to give so much.

As a pediatric surgeon, he cannot ignore his calling. He and those around him literally risk their lives to help Iraqi children in need of his surgical expertise, usually as victims of trauma but also as patients with rare diseases. Dr. Coppola heroically tries to save the life of a young Iraqi girl named Leila whose family home was lit on fire because her father was an Iraqi policeman fighting to restore order. He redirects his rage into a passion to help others.

Amid the chaos of war, Dr. Coppola finds good men and women trying to help one another. He works with Iraqi doctors and sits down to a proudly cooked dinner of lamb stew with the family of an Iraqi translator he’s helped. He plants sunflowers and grows cilantro from the fertile crescent’s dusty soil that fills his bunker’s sand bags. And despite happily returning home after his first tour of duty, Dr. Coppola somehow feels himself pulled back to the theater of war where he might stitch together a torn vena cava, remove shrapnel-laden intestines, or lay hands upon a soldier who’s too damaged to ever live again.

While Dr. Coppola does not write in a literary style to impress the New Yorker, he does present a sincere and candid story of his life in the Iraqi conflict. The reader is left with a deeper appreciation of what our soldiers and military families risk and sacrifice in the service of our country.

The terrible question of whether this war was a just war is not made easier by the savagery and gruesome carnage on display on the operating room table in Balad Air Base. But I was amazed by the moments of compassion between doctor and patient, between American soldier and Iraqi civilian, and between the hopeful and those in despair. In a grander sense I hope these compassionate moments reveal that greater seed of humanism in us all, which, given nurturing and peace, might germinate still in this ancient, war torn cradle of civilization.

I recommend Dr. Chris Coppola’s book, and would like to thank him and all the medical healers, including my aunt, a nurse who was stationed in Kirkuk, for their noble service both at home and abroad. There is a short video you can watch on Dr. Coppola’s website.

The book can be ordered via a traditional bookstore like Powell’s.com.

Coppola: A Pediatric Surgeon in Iraq

3 thoughts on “Review of Coppola: A Pediatric Surgeon in Iraq”