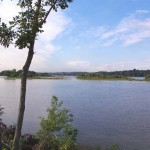 “Will you grab that spider web?” my grandmother said abruptly. We were sitting on an old bench overlooking the river. It was September. I had sprung her from the assisted living home earlier that day.

“Which spider web are you talking about, Gram?” I asked her. My eyes were sleepily watching the timeless flow of the big river, the eddies and swirls along the banks, and the gracefully bending boughs of the old oak trees as they waltzed with the wind.

“There to the left!” she said with certainty, reaching her bony hand into the sky and grasping at thin air. “Get it, will you?”

I looked again but there was nothing. I knew that my grandmother’s mind had developed a little static among the signals, a few crackling wires in the electric grid of her brain, and I figured that her eyes were playing tricks on her.

She seemed a little disappointed that I did not share her perception. “It’s feathery, and it’s drifting just over the river. It’s actually quite pretty.”

I let my eyes lose their strict focus. There was muddy blue from the river, majestic green and brown from the weeds, a smattering of orange and red from the leaves about to change in fall, and slate gray from the worn stones and pebbles along the riverbank. But still I couldn’t see the spider web.

“I think your eyes are playing tricks on you, Gram,” I finally confessed.

She frowned ever so slightly, embarrassed by the loosened reins she held over her body and the cloudy lenses through which she saw the world. She was a proud woman. She used to take me fishing along a tributary of the big river. It disgusted her that she could no longer drive a car safely.

“Well, the river sure is beautiful.”

“Shouldn’t we be heading back to the nursing home?”

“You should get going, I don’t want you staying too long. You must be bored.”

“No Gram, I’m quite happy. Do you remember that summer the river was so low we could walk across it?”

She smiled. “I sure do.” She turned her head away from the spider web. I watched her ancient eyes gazing across the flow to the far banks of the mighty river. “It’s such a beautiful day here in the sun.”

Years have passed since that day. I wish I could take her down to the banks of the river and just sit there again. I wish I could hear her voice on the phone. I wish I could feel the knobby bones of her fingers in mine and marvel at how different our skins look.

It took me some years, but finally I can see the spider web. It floats off to the left side, just like she said it did. When I walk through the snow or look to the sky it is quite prominent. Sometimes it angers me that I’ve lost that perfect clarity of youthful vision I once had. Will I travel the rest of my life with this gray web they call a floater? Will I be an old grandfather someday and forget that the hovering filaments are only visible to my own retina? Unaware, will I ask my own grandson to catch the web on a beautiful fall day, before he takes me back to the nursing home?

The spider web is pretty, Gram. I’ll remember to watch for it out of the corner of my eye. I’m glad you saw it, too.